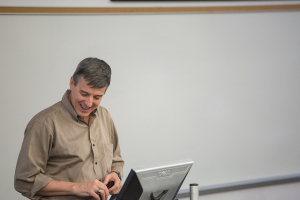 Imagine an electronic “tattoo” on your skin that could continuously monitor your health, or tiny, biocompatible sensors that could treat a traumatic brain injury at the site. It may seem like science fiction, or at least a dream of a very distant future – but as John Rogers of Northwestern University explained to the UH community last week, these are both current examples of biocompatible devices that can integrate with the human body.

Rogers, the Louis Simpson and Kimberly Querrey Professor of materials science and engineering, biomedical engineering and medicine and member of the National Academy of Engineering, talked “Soft Electronics for the Human Body” at the Distinguished Engineering Rockwell Lecture held on March 2. His talk described the past, present and future of devices and electronics used in clinical healthcare.

In the biological world, materials are soft, curved and flexible; in contrast, semiconductors and electronic systems are rigid, hard and planar. This profound mismatch of properties limits the capabilities of electronic devices to integrate fully with the body to diagnose or treat diseases.

Over the last decade, however, increased collaboration among the mechanical engineering, materials science, electrical engineering and advanced manufacturing fields has let to the emergence of new classes of biocompatible electronics – that is, technologies that are soft, flexible and transient, much like biological materials. This has ushered in a new era of soft electronics for the human body.

Rogers obtained B.A. and B.S. degrees in chemistry and in physics from the University of Texas, Austin, in 1989. From MIT, he received S.M. degrees in physics and in chemistry in 1992 and a Ph.D. degree in physical chemistry in 1995. From 1995 to 1997, Rogers was a Junior Fellow in the Harvard University Society of Fellows. He joined Bell Laboratories as a Member of Technical Staff in the Condensed Matter Physics Research Department in 1997, and served as director of this department from the end of 2000 to 2002. He then spent thirteen years on the faculty at University of Illinois, most recently as the Swanlund Chair Professor and Director of the Seitz Materials Research Laboratory. In 2016, he joined Northwestern University as the Louis Simpson and Kimberly Querrey Professor of Materials Science and Engineering, Biomedical Engineering and Medicine.  His research has been recognized by many awards including a MacArthur Fellowship (2009), the Lemelson-MIT Prize (2011), the MRS Mid-Career Researcher Award (2013), the Smithsonian Award for American Ingenuity in the Physical Sciences (2013), and the ETH Zurich Chemical Engineering Medal (2015). He is a member of the National Academy of Engineering, the National Academy of Sciences, the National Academy of Inventors and the American Academy of Arts and Sciences.

Please click here to view photos from the event!