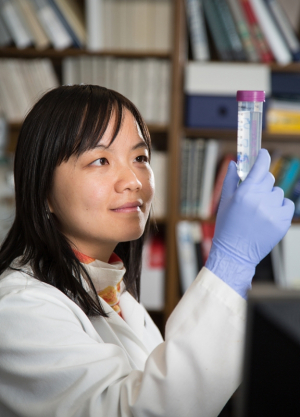 The recent water crisis in Flint, Michigan brought the importance of lead release in water distribution lines into the national spotlight and raised public awareness about the value of such research.

After the city of Flint’s water supply was switched from Lake Huron to the Flint River in 2014, a host of problems flooded into area residents’ homes. Many residents reported foul-smelling, brown water coming from the taps and some reported experiencing health problems. In late 2015, it was determined that these issues were related to a high lead concentration in the water caused by corroded lead water lines.

Typically, phosphate is added to water sources as a corrosion inhibitor to prevent the lead in distribution pipes from dissolving into the water. Phosphate catches lead iron as it releases from the pipes and deposits it back onto the pipes’ surfaces as a solid mineral scale. Mineral scales, which build up over time, serve to immobilize the lead and reduce the lead concentration in the water.

When the city of Flint changed water sources, a corrosion inhibitor was not added to the highly corrosive waters of the Flint River. Subsequently, the untreated water dissolved the pre-existing lead phosphate mineral scales inside the pipes, exposing the lead pipes directly to the corrosive water. As lead leached into the water, it oxidized the disinfectant chloride, which is added to water sources to kill disease-causing pathogens, rendering it ineffective and increasing the health hazards present in the water.

Hu and her colleagues from Washington University, Daniel Giammar and Jill Pasteris, are investigating both homogeneous and heterogeneous lead phosphate precipitation in lead distribution pipes. Lead phosphate precipitation is affected by pre-existing mineral or organic coatings on the pipes and the various elements of the aqueous chemistry, such as alkalinity and organic matter in the water source. In her lab at the Cullen College, Hu’s research focuses on investigating the nanoscale interfacial interactions that occur among distribution pipe surfaces, mineral scales and aqueous components of water sources in transportation lines,to understand the fundamental mechanisms that control heterogeneous lead phosphate mineral scale formation. Her colleagues at Washington University, funded by NSF and Water Research Foundation (WRF), are investigating the homogeneous lead phosphate formation and conducting tests on actual pipes collected from several cities in the United States.

In light of the Flint water crisis, Hu said this research on reducing lead release in water lines has far-reaching and immediate potential for impacting public health.

“This is a wonderful project because of its direct link with real world application,” she said.