UH Researcher Recognized for Work in Clean Energy
May 26, 2016
By
Jeannie Kever 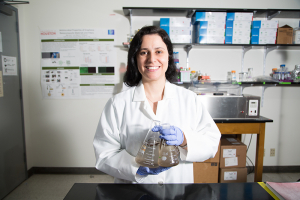 Debora Rodrigues, associate professor of civil and environmental engineering at the UH Cullen College of Engineering, has received the 2016 Clean Energy Education and Empowerment (C3E) Research Award. Her work focuses on developing bio- and nanotechnologies to reduce energy costs in water and wastewater treatment.

The C3E initiative, launched in 2010 by the U.S. Department of Energy (DOE) and led in collaboration with MIT Energy Initiative and the Stanford Precourt Institute of Energy, aims to encourage women’s participation and leadership in science, technology, engineering and math (STEM) by highlighting female leaders in STEM fields. C3E hosts an annual Women in Clean Energy Symposium to help women in the energy sector build professional networks.

Rodrigues received this award for her body of work, including patents, publications and her role in creating outreach programs, along with her extensive research in the nexus of water and energy. She said she was first drawn to this work because of health problems associated with microbial water contamination in her native country of Brazil.

“Making a difference, especially in the developing world, requires solutions to be simple and inexpensive,” she said.

“I am happy to see Dr. Rodrigues’ work recognized by leaders in the energy field,” said Roberto Ballarini, Thomas and Laura Hsu professor and chair of the civil and environmental engineering department. “Her innovative work holds great promise for water treatment in the developing world, but it also offers a way to greatly reduce water and wastewater treatment costs everywhere.”

Rodrigues has two technologies under development, both designed to be reusable and require little or no energy. The first is a nanocomposite coating, capable of removing heavy metals, radioactive materials and micro-organisms. The second uses hydrogel polymer beads, aimed at removing nitrogen and phosphorous from agricultural runoff.

Both have been licensed to a team of former UH business students, who formed the startup company WAVVE Stream Inc. The name comes from the first letter for the word “water” in English, Spanish, Swedish, Russian and French, the native languages of each founding team member.

Rodrigues serves as an advisor to WAVVE, although she has no plans to leave teaching and research for the business world.

“I love research,” she said. “I like to be with my students. I think I can make a difference from here.”

Rodrigues received the inaugural Emerging Investigator Research Award from the Sustainable Nanotechnology Organization in 2014 and is the recipient of a National Science Foundation Faculty Early Career Development (CAREER) Program Award. She also runs a NSF-funded research experience for high school teachers and is the main advisor for the UH chapter of Women in Engineering.

This year’s symposium will be held in Palo Alto, Calif. on May, 31. Rodrigues is one of eight awardees that will be recognized at the conference.