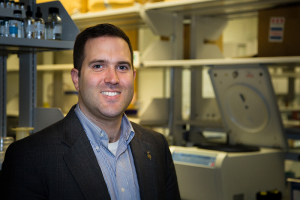 Jeffrey Rimer, Ernest J. and Barbara M. Henley Associate Professor of chemical and biomolecular engineering at the Cullen College, received the 2016 Owens Corning Early Career Award from the American Institute of Chemical Engineers (AIChE) for his multifaceted research on crystallization.

The Owens Corning Early Career Award, administered by the Materials Engineering and Sciences Division (MESD) of AIChE, recognizes researchers under the age of 40 who have contributed outstanding work in the broad field of materials science and engineering. The award is given to only one individual each year. As the 2016 recipient, Rimer will receive a plaque and $1,500 honorarium, as well as present a plenary lecture at the 2016 AIChE Annual Meeting in San Francisco next November.

Rimer’s research explores both classical and nonclassical crystallization, and his work has led to the development of drugs for kidney stones and malaria. Rimer’s extensive research on zeolites, a crystalline material used in a variety of everyday products, led to the first in situ evidence of how zeolites grow, which was published in Science Magazine in 2014.

Rimer and his colleagues developed a novel technique to study the growth of zeolites using solvothermal atomic force microscopy, or AFM, that allows researchers to view crystal growth in real time and in realistic environments. With AFM, Rimer’s research group was able to identify that zeolites growth by complex processes involving nonclassical crystallization. In 2015, he was among a group of 15 researchers to publish a review of nonclassical crystallization in Science.

Aside from zeolite crystallization, Rimer studies many types of biogenic crystals that grow classically, such as kidney stones.

According to the National Kidney Foundation website, more than half a million people visit the emergency room for kidney stones each year and an estimated one in 10 people will develop a kidney stone during their lives. The most common type of kidney stone is formed when calcium and oxalate combine in urine due to inadequate calcium and fluid intake. By uncovering the fundamentals of crystal growth, Rimer’s group identified a potential therapy for kidney stones using a natural supplement.

Knowledge of classical mechanisms of crystal growth allowed Rimer and his colleagues to determine how antimalarial drugs operate in cases of malaria. In collaboration with Peter Vekilov, John and Rebecca Moores Professor of chemical and biomolecular engineering, Rimer developed a platform to characterize and screen antimalarial drugs.

“There are many hypotheses [in the scientific community] about how antimalarial drugs work, and we’ve been able to develop a unique system to test and validate these hypotheses,” said Rimer.

Rimer said he’s deeply grateful to all of the collaborators and students he’s worked with over the years to advance this research. Joseph W. Tedesco, dean of the Cullen College of Engineering, said Rimer is highly regarded for his innovative teaching style and unwavering commitment to his students.

“From helping UH students commercialize his inventions to inviting undergraduates to conduct research in his laboratory, Dr. Rimer has always gone above and beyond expectations to enhance the education of his students," said Tedesco.

“I’ve been very fortunate to work with excellent students and postdocs over the years, and I think this award speaks to that,” said Rimer. “I really owe a lot to my research group. They are the reason why many of our initial ideas have come to fruition.”