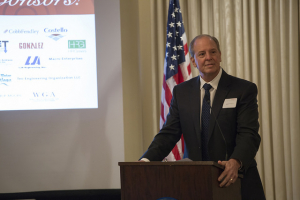 Joseph W. Tedesco, Elizabeth D. Rockwell Dean of the UH Cullen College of Engineering, has been elected as a fellow of the American Society of Civil Engineers (ASCE). This prestigious honor is held by less than 4 percent of ASCE members.

Tedesco's primary research interests are in modeling of load-bearing and stress on concrete and other structural materials. An outstanding educator and researcher in the field of civil engineering, Tedesco authored two textbooks on structural dynamics and served as an author, coauthor, or editor of over 170 books, book chapters, presentations, and conferences. He has also been the principal investigator on several dozen granted research projects.

As an active member of ASCE, Tedesco has served on numerous ASCE technical committees and on the editorial board of ASCE’s Journal of Structural Engineering for 12 years. He also served as faculty advisor to the ASCE Student Chapter at Auburn University from 1986 to 1992.