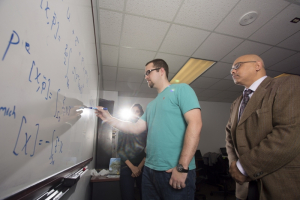 There are a handful of naturally occurring materials, known as piezoelectric materials, which generate electricity if you bend, stretch, or apply another mechanical force to them, and vice versa – if you apply a voltage across them, they’ll deform accordingly. These materials are currently the subject of intense research for their potential applications in energy harvesting, artificial muscles and sensors, among others. These materials are also used in everyday devices such as loudspeakers– which rely on piezoelectrics to convert electrical signals to mechanical vibrations which create sound waves to produce the desired acoustic signal.

Now, the M.D. Anderson Chair Professor and mechanical engineering department chairman at the University of Houston Cullen College of Engineering, Pradeep Sharma, and his doctoral student, Matthew Zelisko, in collaboration with scientists at Rice University and University of Washington, have identified one of the thinnest possible piezoelectric materials on the planet – graphene nitride. The material measures just one atomic layer (or, in other words, it’s a thousand times thinner than a single strand of human hair).  Interestingly, the material isn’t supposed to be piezoelectric at all. Together, they have published their findings in the journal Nature Communications.

Perhaps even more compelling than the thinness of the material is the fact that it wasn’t supposed to have any piezoelectric properties. “Matthew did the calculations and simulations to show that it should be piezoelectric, which was unexpected,” Sharma said. Sharma and Zelisko’s experimental collaborators at Rice University, led by engineering professor Pulickel Ajayan, fabricated the graphene nitride sheet devices. Another group of collaborators, led by Professor Jiangyu Li at the University of Washington in Seattle, tested the material using a state of the art apparatus and proved it was, indeed, piezoelectric.

The reason for graphene nitride’s unexpected piezoelectricity was predicted by Sharma in some of his earlier theoretical work on the topic. “Some of Pradeep’s prior work identified that pure graphene with triangular holes can effectively become piezoelectric,” Zelisko said. Essentially, Sharma and Zelisko proved through this latest research that any semiconducting material can be made piezoelectric by cutting triangle holes pointing in the same direction on the material. The reason for the triangle shape, they said, is that the shape of the holes can’t have mirror symmetry, or else the materials won’t become piezoelectric. “We did scientific theoretical work that told us this would work, but this was the first time we proved our prediction,” Sharma said.

Zelisko has been conducting research with Sharma for the past two years while he continues to pursue his Ph.D. in mechanical engineering – an experience which he describes as “very rewarding.” With at least one year of school left before he earns his degree, Zelisko said he plans to remain by Sharma’s side, conducting research, for as long as he can before graduation. Sharma and Zelisko said they have plans to publish more research together before the year is up.