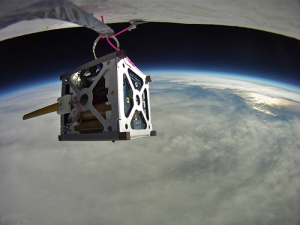 In the electrical and computer engineering (ECE) department at the UH Cullen College of Engineering, small satellite research has taken flight in recent years, providing both students and faculty within the Cullen College unprecedented access to space, space education and space research.

Small satellites (or "CubeSats") are generally classified as small, cube-shaped satellites that weigh less than three kilograms. Compared to standard-sized satellites – which typically cost hundreds of millions of dollars to develop and launch – CubeSats can be developed for about $5,000 and launched for under $100,000. These cost factors make it practical to operate multiple satellites in coordination, providing the benefit of redundancy: if one is damaged or malfunctions, others can pick up the slack.

Last year, ECE faculty members Ji Chen and David Jackson received seed funding from the Cullen College to launch a research program aimed at developing improved antennas for small satellites. Shortly thereafter, NASA offered Jackson and Chen up to $200,000 over the next two years to continue their research within the Small Satellite Research Laboratory at the Cullen College.

While the return on investment for the Small Satellite Research Laboratory was great news for the Cullen College, the real winners, in this case, are the students who now have the opportunity to conduct cutting-edge, NASA-sponsored research within the small satellite lab. Undergraduate and graduate students involved in research within the Small Satellite Research Laboratory work side-by-side with NASA Johnson Space Center (JSC) experts in researching, developing and testing new technologies for small satellites with the very high probability that their work will be deployed into space as early as next year.

Now, ECE chairman Badri Roysam, along with ECE faculty members Chen, Jackson and NASA collaborators Steve Provence and Steven Huning, have published an article in the January 2014 issue of “ECE Source” which details the benefits of investing in small satellite research at the college-level for both undergraduate- and graduate-level ECE students.

The article, titled “Elevating the ECE Capstone Design Experience with CubeSats,” is the featured article in the latest issue of “ECE Source,” the newsletter of the Electrical and Computer Engineering Department Heads Assocation (ECEDHA).