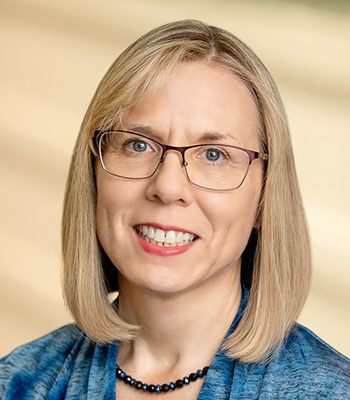 Reaction-diffusion processes are versatile, yet underexplored methods for manufacturing that provide unique opportunities to control the spatial properties of materials, achieving order through broken symmetry. Inspired by reaction-diffusion systems in nature, we seek to harness rapid reaction-thermal transport during frontal polymerization to drive the emergence of spatially varying patterns and tailor properties during the synthesis of engineering polymers and composites. Tuning of the reaction kinetics and thermal transport enables internal feedback control over thermal gradients to spontaneously pattern morphological, chemical, optical, and mechanical properties of structural materials. Functionally graded and patterned regions with two orders of magnitude change in modulus and over 200°C change in glass transition temperature are achieved in thermoset polymers. Small changes in catalyst, resin formulation and processing temperature lead to remarkable changes in patterned structure. We characterize the influence of this patterned structure on the fracture properties of the polymer and find changes in toughening mechanisms and failure modes associated with the patterned structure.

Nancy Sottos holds the Maybelle Leland Swanlund Endowed Chair and is Head of the Department of Materials Science and Engineering at the University of Illinois Urbana Champaign. She is leader of the Autonomous Materials Systems (AMS) group at the Beckman Institute for Advanced Science and Technology and director of the University of Illinois spoke of the BP International Center for Advanced Materials. Sottos is also a co-founder of Autonomous Materials Inc. (AMI). Inspired by autonomous function in biological systems, the Sottos group develops polymers and composites capable of self-healing and regeneration, self-reporting, and self-protection to improve reliability and extend material lifetime. Her current research interests focus on new bioinspired methods to manufacture these complex materials. She is a member of the National Academy of Engineering, the National Academy of Science, and the American Academy of Arts and Sciences. She is also a Fellow of the Society for Experimental Mechanics, the Society for Engineering Science and the American Association for the Advancement of Science.

A fourth generation Houstonian, Mrs. Rockwell was an Executive Director, Private Client Division of CIBC Oppenheimer Corp. She was widely recognized as an expert in retirement, estate, investment, and tax planning. She was an early proponent of the Keogh and IRA plans, for which she has been nationally recognized.

In 1991, she qualified to be a member of the Million Dollar Round Table as well as the Texas Leaders Round Table. Since 1990 she had authored a monthly column for the Houston Chronicle.

Mrs. Rockwell served on the Board of Governors for the Houston Forum, and as a Board member of the American Red Cross, the Greater Houston Women’s Foundation, the University of Houston Alumni Organization, and the Greater Houston Preservation Alliance. She was a member of the River Oaks Business Women’s Exchange Club, the National Tax Sheltered Annuity Association, the Texas Association of College Teachers, and the Houston Association of Life Underwriters.

Among her numerous honors, she has received an Honorary Doctorate of Humane Letters from the University of Houston, the Distinguished Alumna Award from the Houston Alumni Organization and from the UH College of Business Administration. Throughout the years she has been recognized for her many achievements by the Education Foundation of Harris County, the Houston Community College System’s Television Station Advisory Council, and the Houston Mayor’s READ Commission.